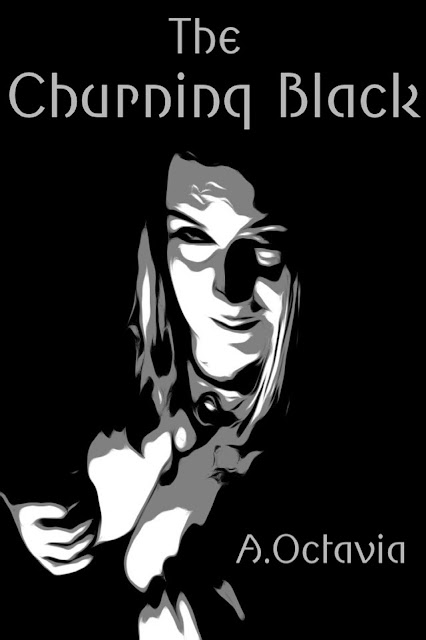 The ashes by my feet were little more than a pile of crimson dust.  It was a foot high and ringed with shredded remains of blackened lace.  The hotel room was under a penthouse suite, and the upper floors were still just starting to get up to a full burn.  Sirens wailed in the streets below, and I could just hear the screams of people trapped in the stairwells.  It was unnecessary, really.
Tracking Damnia wasn’t a task for the faint of heart, or a weak constitution.  Burn wards across half the star-system were filled with her victims.  The sprinklers burst open overhead and started spewing out foul brown sludge that instantly ruined the silk wallpaper and the chalk-white carpets.  The water soaked me to the skin as I watched the powdered ashes turn to mud by my toes.

It was ten-thirty when the bellhop’s watch stopped.  The ashes started to steam.  The water spewing from the pipes finally cleared as the rivulets forming in the carpet boiled.  The liquid turned darker, blood-black before threads of sinew formed, and the faintest traces of hollow bones took shape.  It was like watching a plastic toy melt in reverse.

Fingertips, muscle, tendons, and gore mingled beneath a hidden depth on the hotel room floor, it congealed, formed, birthed, and ascended as if lifted by a pedestal was beneath her feet.  As she cleared the surface of the pool, Damnia was sheathed in a covering of crimson hair, long and full, clinging wetly to the palest white skin.  Her white-less eyes glowed emerald green, like gemstones, beneath her eyelids.  Her heavy breasts were capped with pale areolas as big across as the bellhop’s finger.  Her skin was so perfectly smooth, so clean, like only a thousandth-born virgin could be.

The water from the sprinklers steamed against her, hissing as it dripped against her skin.  I felt it radiate like a furnace.  It was Hell’s warm.  The smell of her skin, and the sight of her mons, wet, succulent, untouched…  It mingled with the intoxicating sensation of the heat, and it made my flesh harden.  I felt the busboy’s cock throb against his thigh just as part of the roof collapsed behind me.  I heard the squeal of a gas line rupturing and smelled the acrid stench as it mingled with the sweetness of Damnia’s sex.  The gas ignited against her skin.  The blast hit like a bomb, but I held my ground out of sheer will even as the finery of the suite was ripped away around us.

It took a few breaths before she opened her eyes, and her lips curled into a razor-thin smile.  The sprinklers were torn away, and water poured in gurgling beats like an arterial flow until the heart slowed to a stop.  The sounds of distant trapped voices were gone, and the city traffic was crisp between the gasps of raining glass.  The inferno that wrapped itself around the hotel’s upper floors warmed the dry winds darting through the gaping holes in the walls.
“Don’t look at me like that, Amdusias-- it gives me chills,” she said and flashed me a wicked grin.  Her form suddenly flowed like lava.  When she rose from the ashes, she was a statue, ridged and impervious, but now—now, her body was languid and supple.  She looked around her in mild curiosity, like she was seeing it for the first time.

I forced myself to blink and cleared my throat.  It wasn’t easy with the char and smoke drifting past us in waves.  “My apologies, Damnia, but I simply cannot look upon you any other way.”  I closed my eyes, but it only shut out the mortal world.  Every other sense I had screamed at me mercilessly. The smell, the heat, and her presence -- I was back among my realm.  I was home again, and it hurt like Hell.

I wrenched my eyes open as I stood and found Damnia was already close enough to lay a hand against my face.  She only grazed the bellhop’s cheek with the back of her fingers, but I felt his soul scream in pain.  My knees buckled beneath me.

“You say the sweetest things, Lord,” she breathed “But then, you always did.”  Her lips pursed, and there was another burst of heat.  “Isn’t that why she cast you out?”  She moved away, and the pooling water turned to steam under her footsteps.

I blinked again and glanced away from the globes of her ass.  Heat waves rose from it and made her skin shimmer.  “Our Queen is not without her reasons.”  Memories rolled over me like waves.  “And yes, my skilled tongue is among them.”

Damnia glanced back at me, “Hmm, I bet.  But you are also a conspiring, selfish egotist.  This begs me to wonder, Lord, why have you come to me?”
The reflections in the other glass towers showed just how hot the fires burned above us, and it was hard to clear my thoughts.  Damnia’s breasts hung perfectly from her chest, and the smooth juncture between her thighs was entirely too delicate to ignore.  “Because you walk in both worlds, Damnia.  You see everything from both sides.”

She laughed, and it was sweeter than birdsong—light and musical.  It took every ounce of willpower I possessed not to force myself upon her where she stood.  “Oh, come now, Lord.  You have legions at your command.  You have stalked battlefields greater than the Queen’s plantations like a phantom, and you expect me to believe you are without voices to keep you informed?”

I swallowed hard.  “I need to hear a clear voice, Damnia, from someone who can see things without the taint of politics from our Queen’s court.  Something is churning in the depths that no one within is willing to see.”

Damnia ran her fingertips along the countertop of the ruined kitchen and watched small flames erupt under her skin.  “Such a voice does not exist, Amdusias.  And it’s possible it never really did.  She loathes you to no end, but still, she does not raise arms against you.  And you, you took her judgment without question.  I’m not alone in wondering why.  So answer me that one question, Lord, and if your tongue really is as gifted as they say, I will bend my wings to its will.”  I watched her place her palms on the countertop through a shard of glass, and it smoldered.  “Why?”

I felt her eyes on me, even when she turned away. She watched me study the line of her back from her shoulders to her hips and linger at the crack of her ass.  She shifted her hips and turned to face me again.  Her hair framed her face and her nipples, and I sighed heavily.  “I bed her daughter.”

Damnia almost laughed, thinking I was taunting her, but she caught herself.  A grain of recognition and memory collided in her mind and swam before her eyes.  Minutes passed while the weight of my revelation leveled itself against her.  When it settled into her depths, Damnia licked her lips softly, and I watched her nipples harden.

She crossed the room quickly and took the bellhop roughly by the back of his head.  Our mouths were mashed together for just a moment before she released us rather than let the heat melt his flesh.  I groaned at the sensation flooding my loins.  I may have even growled, but I can’t remember.  She stared at me with undisguised longing, “I’ll say this much, she has good taste.”

I wiped the corners of my mouth and tried to steady the bellhop’s racing heart.  I could feel the last minutes ticking by fast.  The bells were going to start ripping me from the human any second.  “I must know, quickly, who is stoking the depths.  Armies are shifting, alliances are forming.  I can feel it.  Somewhere a line has been drawn, and I need to know where the tides break.”

Damnia looked deep into my eyes and nodded; then reached for me again, this time pressing herself against me in a frenzy of boiling kisses.  I felt my skin blister the moment the bells started to chime.  She stripped my clothes away from my chest, and I grabbed at her, pawing at her breasts and dragging my fingertips down to her cleft.  I touched her labia and felt the hot molten core of her sex before the second chime hit.  Agony ripped through me, but the bellhop didn’t suffer; his soul fled the moment it could, as if expecting what was to come.

Damnia groaned as my fingers probed her, grazing her reborn virginity.  She howled when I turned her around and bent her over.  She reached back to guide me into her.  I felt her hand struggle to hold my throbbing shaft.  Damnia moaned softly as I nuzzled her lips, and then gasped when I edged forward and plunged my cock into her.  I continued to swell inside her as my body convulsed.

At the third and fourth tolling of the bells, I started to fully transform again, but Damnia held herself in place and allowed me to shift atop her.  She thrust back at me, bucking against me hard enough to take every inch of me until she simply couldn’t anymore.  By the time the last bell tolled, Damnia was shuddering, dripping from our junction in drops that burned the floor between her spread legs.  She held onto my front legs as if her life depended on it.  I felt her flesh clamping down on me, milking against the head of my cock.  I fought the urge to rear up, but I knew it would only rip her apart.  I shunted forward, barely moving, and she grunted at first, then screamed for me to fill her.  She begged me to take her, to claim her as my own and make her erupt.  She cooed softly about how close she was, about how badly she needed to burn.  She held my front legs even tighter than before, and I had no choice but to obey.

When I reared up, Damnia screamed.  It was a sound that burned the air in a fiery chorus, like a flock of eagles dying.  She burst into flames as she climaxed.  I held myself up on my hind legs as long as I could, walking in short, agonized steps like a circus horse in a ring.  My head jerked from side to side as the flames licked at my neck.  I’d never felt anything like it before, or since.  I felt myself release into her burning depths, and she managed to turn around on my cock just as her wings erupted from her back.  She clasped her hands around the thick length of my neck and pressed her head against me.  I felt her grunt with every step I took.

She screamed again, and as another orgasm overtook her, she burned even hotter.  Embers were ripped away from her in the wind as she started turning to ash.  I held myself aloft until she burned down to something I couldn’t recognize and dropped to the floor.  My hooves sparked against the concrete, and I could feel her wetness on my cock as the breeze licked my skin.  Her embers and ashes were scattered around the room, but I knew they wouldn’t stay idle for long.  Soon, Damnia would be reborn, beautiful, clean, and ready to burn again.

Posted by OctavianEarth at Wednesday, August 14, 2013